The Colorado Sun | By Jason Blevins

During a mid-December weekend, the dispatchers at the Summit County 911 Center fielded 71 automated crash notifications from skiers’ iPhones and Apple watches at the county’s four ski areas. None of them involved an emergency.

But each of them took time to sort out. If the skier did not answer a return call, a special operations deputy contacted ski patrollers to check the location of the automated call.

“We are not in the practice of disregarding calls,” said Trina Dummer, the interim director of the Summit County 911 Center. “These calls involve a tremendous amount of resources, from dispatchers to deputies to ski patrollers. And I don’t think we’ve ever had an actual emergency event.”

The “crash detection” and “fall detection” features on the Apple iPhone 14 and watches automatically call 911 when the devices detect a sudden stop that, in concept, means the user has been involved in a car crash. The technology has been heralded in several instances for saving lives, but it’s not meshing well with skiers who can stop suddenly and often fall without the need for emergency help.

All of the automated 911 calls from skiers pouring into ski town emergency call centers this month — with a robot voice sharing latitude and longitude coordinates of a potentially injured party — are about snowy tumbles, not car wrecks.

Dispatch operators in Grand, Eagle, Pitkin, Routt and Summit counties — home to 12 very busy ski hills — are fielding record numbers of the automated calls from skiers’ Apple phones and watches, tying up emergency response resources. When a 911 call comes in, each call is handled in the order it arrives, so an automated call from a skier’s phone could delay response to a 911 caller with a real emergency.

“We are absolutely diverting essential resources away from people who need it toward a feature on a phone,” Dummer said.

Apple launched an automatic fall detection feature in its watches a couple years ago. That started a slow trickle of calls from tumbling skiers into resort-area dispatch centers. The new iPhone 14 sends calls to 911 whenever the phone detects a jarring jolt it determines to be similar to a severe car crash. That has spiked the number of 911 calls from skier phones.

Loeb usually has one or two operators taking 911 calls and existing emergency calls can be put on hold to field incoming calls from iPhones. While his team has helped fallen hikers and residents whose watches have notified emergency services when they have fallen and need help, so far there have not been any real emergencies from the automated calls coming from the ski slopes.

Loeb was able to share his concerns with the feature with Apple this fall as the company tested a new system that allows users to call 911 using a satellite connection when they are out of range of their mobile network.

That satellite SOS technology will be a big benefit to mountain users, Loeb said.

“We did have a conversation with Apple about the crash detection this fall and they told us they were aware of the issue and were working on a fix they were hoping to have out in the first quarter of 2023,” Loeb said.

The emergency dispatchers at the Vail Police Department get about 20 of the automated iPhone calls a day. Dispatch operators try to call the phone back to make sure there is not an emergency. Most of the time it’s a skier on the hill and there is no need for assistance. But earlier this week the iPhones from two users simultaneously buzzed Vail’s 911 dispatch and both were involved in a car crash.

So the technology can be helpful, said Marc Wentworth, the director of the Vail Public Safety Communications Center.

Dispatchers in Grand County get about 20 to 30 of the automated calls a day from slopes at Winter Park and Ski Granby Ranch.

Grand County Sheriff Brett Schroetlin said the calls are “problematic and time-consuming” but have not impacted dispatch operations. Dispatchers at the Grand County emergency communications center often can screen the calls to determine there is not an emergency and do not call back unless there is some other indication of trouble, Schroetlin said.

His dispatch supervisor has contacted Apple and received a response that the company is aware of the conflict between skiers and the crash detection technology and are working on a fix, Schroetlin said.

Summit County Sheriff Jaime FitzSimons earlier this year contacted Apple through the company’s online portal for law enforcement and expressed his concern with the automated calls to his dispatch center. The company told him this fall that an update had been completed and it would slow the number of automated 911 calls from skier iPhones and watches.

“But we have not seen our numbers change. We are seeing as many as 20 a day and it’s a tremendous drain on our resources,” FitzSimons said. “We are communicating with Apple to get them to pay more attention to this but it feels like we are trying to turn a battleship in a bathtub.”

Apple engineers developed the “advanced sensor fusion” technology for its crash detection feature using data from crash labs, actual crashes and lots of driving. The technology uses an accelerometer and gyroscope, GPS, barometer and microphone to detect crashes. It is designed to call for help when it detects a “severe crash” capable of causing major lacerations, fractured bones, crushed limbs and bruised organs. Once the crash detection technology is triggered, an aggressive alarm sounds and begins a 20-second countdown in which users can cancel the 911 call. 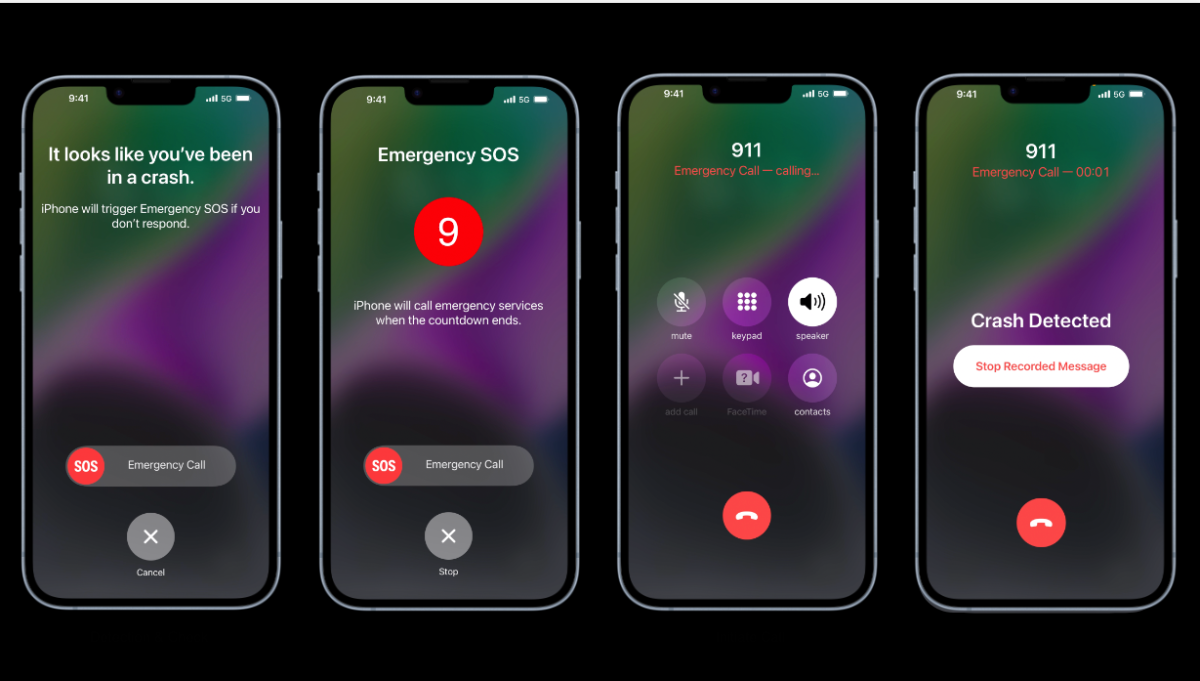 New “crash detection” technology in the Apple iPhone 14 triggers a call to 911 unless the user intervenes in a 20-second window and cancels the emergency call. Resort area dispatch centers are reporting more than 20 calls a day from skier iPhones reporting they have been involved in “a severe car crash.” None of the calls have been an emergency.

The audio recording delivered to 911 operators, which repeats every five seconds, says “the owner of this iPhone was in a severe car crash and is not responding to their phone.”

Backcountry search and rescue teams also rarely dismiss calls for help. Colorado search and rescue volunteers often venture into the backcountry to rescue users of satellite-connected devices who triggered calls for help. Now that iPhones can send an SOS signal through a satellite and the newest phones can send that signal automatically without the user pressing any buttons, backcountry teams are watching Apple’s adjustments closely.

“Without a fix, this is likely to extend to backcountry snowmobilers and perhaps other backcountry recreationists,” said Anna DeBattiste with Colorado Search and Rescue, who pointed to a recent campaign by SAR teams in British Columbia urging backcountry travelers to be aware of the new crash detection technology in their iPhones.

Older iPhones would automatically call 911 whenever the user pressed and held the side button and either volume button. That triggered the first wave of hangup 911 calls from mobile devices in the pockets of skiers who were likely trying to adjust the volume on speakers in their helmets. Now, the new crash and fall detection features — which are enabled on all new iPhones and watches — have added even more automatic calls to emergency dispatch centers. Dummer hopes more users — especially skiers — will disable the crash detection feature on their phones, at least when they are visiting a resort. (Go to Settings > Emergency SOS and iPhone 14 users can turn off “Call After Severe Crash” and users of older iPhones can turn off the “Call with Hold” feature.)

“People need to better understand their phones and know there is a measure of responsibility for owners of phones with these features,” she said.

This article was published via AP Storyshare.