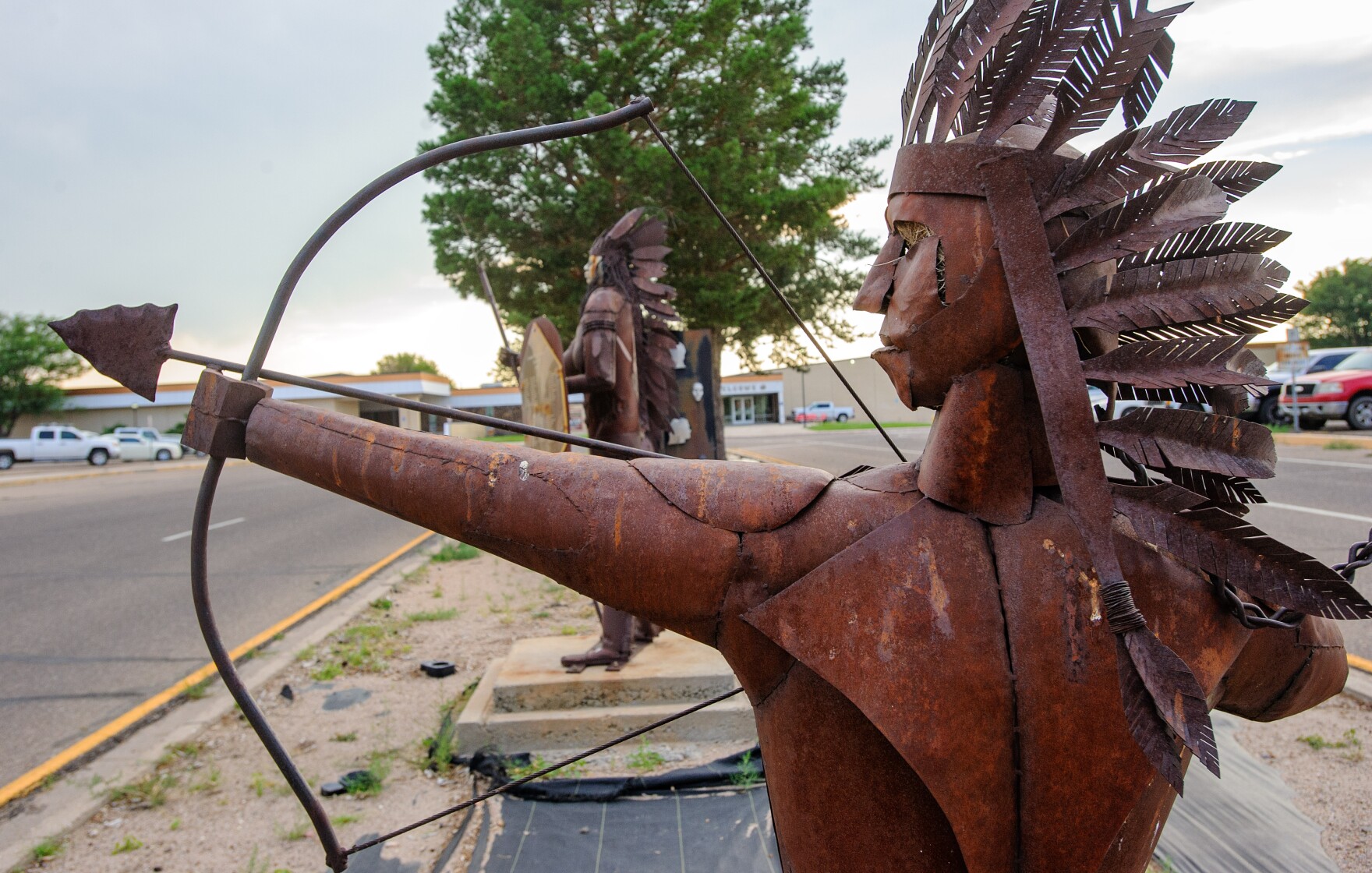 American Indian statues made by Lamar High graduating seniors over the years and donated to the city line Savage Avenue leading to the school in Lamar in this July 15, 2021, photo. Mike Sweeney / Special to The Colorado Sun

This story was originally published in The Colorado Sun.

The Lamar and Yuma school districts were told last week that their preferred team names – Savages and Tribe, respectively — likely would not comply with a new Colorado law that bans the use of Native American mascots.

“Savages is probably the worst word I’ve heard out there, out of all of them,” said Manuel Heart, chairman of the Ute Mountain Ute Tribe and a board member of the Colorado Commission of Indian Affairs.

He went on to read definitions of the word, noting that all were negative or derogatory and questioned why Lamar would want to continue to use the word.

“It hurts to see that somebody would use this word as something proud,” Heart said.

Both districts were advised by Lt. Gov. Dianne Primavera that they should probably have a “Plan B” when they come before the board at its regular meeting in March, one of two upcoming meetings when the board will vote on whether schools are complying with the law.

The discussion came at a special meeting of the CCIA board during which five districts presented plans for changing mascots to comply with Senate Bill 116. Several board members told the districts they had a hard time disassociating Savages and Tribe from the Native American context because of how the schools have historically used their mascots.

The CCIA has found 26 schools within 14 districts to be out of compliance with the new law, and all are facing fines of $25,000 a month beginning June 1 if changes are not made.

Although a lawsuit was filed in November by Mountain States Legal Foundation of Lakewood in an attempt to overturn the law, other districts and schools continue to work toward compliance. The lawsuit has plaintiffs from Lamar and Yuma.

Last week’s meeting was the first at which the CCIA board members discussed specific mascots. The commission also this week posted guidance that the board adopted in December – six months into the year in which schools must comply with the law – that delineates some of the things the board will consider when reviewing mascot changes.

District officials have complained that they’ve been seeking such guidance and feedback since at least September and are now on a short timeline to get the changes made.

“We were getting for the first time very concrete feedback,” said Chad Krug, Lamar School District superintendent. “That was helpful because to this point it’s just been silence. Even if it was hard to hear, we were happy to get feedback.”

He took issue with the board’s guidance to consider the historical context of the name and for generalized comments about the district’s past lack of respect toward Native Americans and its stubborn desire to retain the Savages nickname.

“We are working toward compliance and should not be expected to bear the burden of a historical slant against Native Americans,” he said.

“I believe we can come up with a logo with Savages that doesn’t draw any reference to Native Americans.”

The district’s newly appointed mascot committee will meet Jan. 28 with consultants Kati Knisley and John Jenson to begin work on a rebranding campaign. Krug said Friday that will now include two plans, the original one to remake the Savage nickname and one without using Savages.

The Yuma School District has already been through that process and whittled about 18 suggested nicknames down to three: Tribe, Yetis and Pioneers, Superintendent Dianna Chrisman told CCIA during the Zoom meeting.

Tribe was the overwhelming favorite within the community, she said.

Board member Rachel Bryan-Auker, a tribal liaison with the Colorado Department of Public Health and Environment, said the word tribe is closely associated with Native Americans in Colorado and perhaps more so for Yuma because of its use of the Indians mascot.

Chrisman said she understands that it can be associated with Native Americans, but it has many other definitions, including in religion and pop culture. 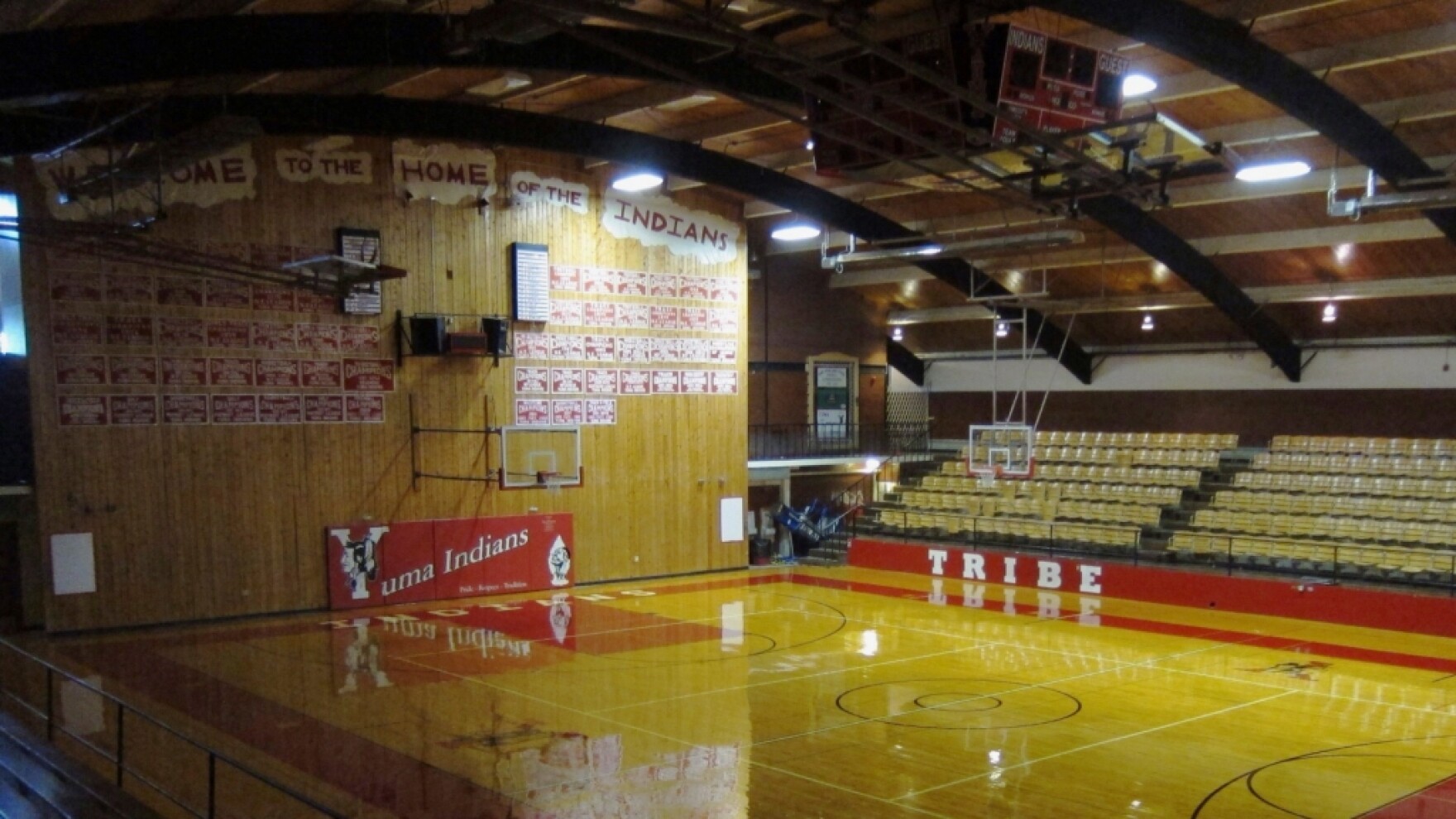 The Yuma High School gym — known as “The Pit” — was branded with the Indians team mascot with the baseboards sporting “Tribe” in this 2012 photo. Eric Lubbers / The Colorado Sun

“Tribe is not unique to Native Americans,” she told the board. “We really are a unique group and we do love the definition of tribe. We’re looking at those alternative definitions. We’ve been careful and conscientious about that.”

When board members persisted that they had concerns about using Tribe, Chrisman asked how that differed from schools that will continue to use Warriors despite past associations with Native American logos and mascots.

“We want equal treatment,” she said.

Bryan-Auker said she personally sees a closer association of tribe with Native Americans than the use of Warriors, but noted she was speaking only for herself.

Other board members who were troubled by the use of tribe did not address the comparison with the use of Warriors.

During their presentations Chrisman and Lamar Board of Education President Lanie Mireles both noted how important their mascot was in their small, tight knit communities.

Mireles said Lamar identifies strongly with the Savages nickname and the board has worked to find solutions that will meet the requirements of the law and the interests of the community. She said it has considered using savage as an adjective rather than a noun, such as Savage Storm.

Two districts that have used Warriors nicknames also gave presentations, and at least one intends to continue its use.

Weldon Valley School District Superintendent Ben Bauman told the board the schools have been eliminating all Native American imagery and the logo has been changed from a W with an arrow to a WV without an arrow or feather.

The district has not had a mascot figure in the four years he’s been there, nor have any of the old Warrior chants or drumming been in use, he said.

When asked by Heart if the community still engaged in such activity, Bauman said that was not evident at school events.

“We cannot control the community, but we can control what we teach our kids,” he said, noting that is an important part of the transition.

Campo School District Superintendent Nikki Johnson said the school rarely has used its Warrior nickname since joining the South Baca Patriots sports cooperative 16 years ago. Some Native American imagery had remained at the school, but it all has been removed, she said.

The school board didn’t think it was necessary to immediately decide on whether the district would retain the Warrior name or any nickname, she said.

“The students identify as Patriots,” she said. “Some alumni would like us to keep the school mascot as Warriors and look for another image and the board considering that.”

The CCIA board members did not give feedback specific to the use of Warriors at the meeting.

At least one other school, Central High School in Grand Junction, has decided to retain the Warriors nickname with a new logo and is in the process of eliminating all Native American imagery.

The Montrose School District is in the process of changing mascots at its middle school and high school but asked the commission for permission to retain the Thunderbirds as the mascot for Johnson Elementary School.

Jacob Price, a school psychologist in the district and a member of the Pawnee Nation, said he has long fought to rid schools of Native American mascots and is in total agreement with Senate Bill 116.

However, he said the Thunderbird is a cross-cultural mythical creature and is the only mascot of that nature on the list of schools not in compliance with the law.

Johnson Elementary School in Montrose has redesigned its Thunderbirds logo to come into compliance with state law requiring schools to eliminate Native American imagery from mascots and logos. Handout /

The district has redesigned the school logo to eliminate Indigenous iconography and believes it is in compliance.

The CCIA board had no questions on the Montrose presentation and gave no indication of whether it agreed with Price.

District spokesman Matt Jenkins said the district has had no further guidance from CCIA since the meeting and expects the board to vote on whether to remove Johnson Elementary from the list at the March meeting.

In the meantime, Montrose High School has narrowed its new mascot choices to: Bulls, Storm, Raptor, Mountain Lions, Mavericks and Red Hawks. It has been the Indians. The middle school’s choices are: Bears, Badgers and Bobcats. It has been the Braves.

The Sanford School District announced Jan. 3 that it would retire its Indian mascot at graduation and will officially become the Thundering Mustangs on May 28. A new logo is being designed.