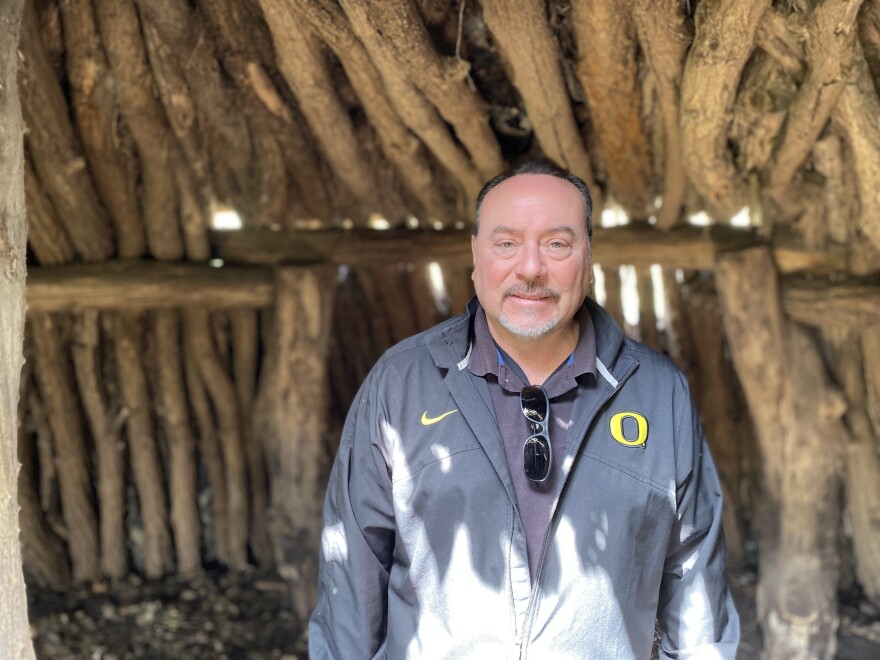 James Pepper Henry, vice chairman of the Kaw Nation. He's standing in a quasi-traditional Kaw dugout in the Flint Hills on their property. Frank Morri | KCUR

LAWRENCE, Kansas — The huge red boulder standing bolt upright in a downtown park doesn't belong here. And after almost a century, the Kaw tribe is reclaiming the rock that, for generation after generation, its people held as a sacred altar.

That 20-plus ton quartzite boulder is now bound for tribal land with the hope that it can strengthen the frayed bond between the Kaw, or Kanza, people and the state that took their land and their sacred stone — even their name.

"There's a little bit of a melancholy feeling that I have when I see it," said James Pepper Henry, vice chairman of the Kaw Nation. "It's a reminder to us as Kaw people of what has been taken from us."

The saga of the stone has come to represent the rough history of what's now known as Kansas. In some ways it symbolizes what native tribes see as invasion and genocide.

When the titanic force of a glacier met billion-and-half-year-old quartzite bedrock in the northern plains, the rock broke, it budged, but it but it did not crumble. The glacier bulldozed south to what's now Kansas about 700,000 years ago.

"Less resistant rocks were just ground to dust," said Andreas Möller, an associate professor of geology at the University of Kansas as he stood by the rock. "It's a survivor. It's hard and resilient, and here it is."

Today, it stands in a tiny park hemmed in on three sides by busy streets and the Kansas, or Kaw, River on the fourth.

It's the same place where white Lawrence boosters propped it up in 1929. They plucked it from the riverbank about 25 miles upstream, brought in on a rail car and bolted a plaque to the rock honoring the city's abolitionist founders — who also were the people who were able to settle in the area only by pushing out the native Kaw. 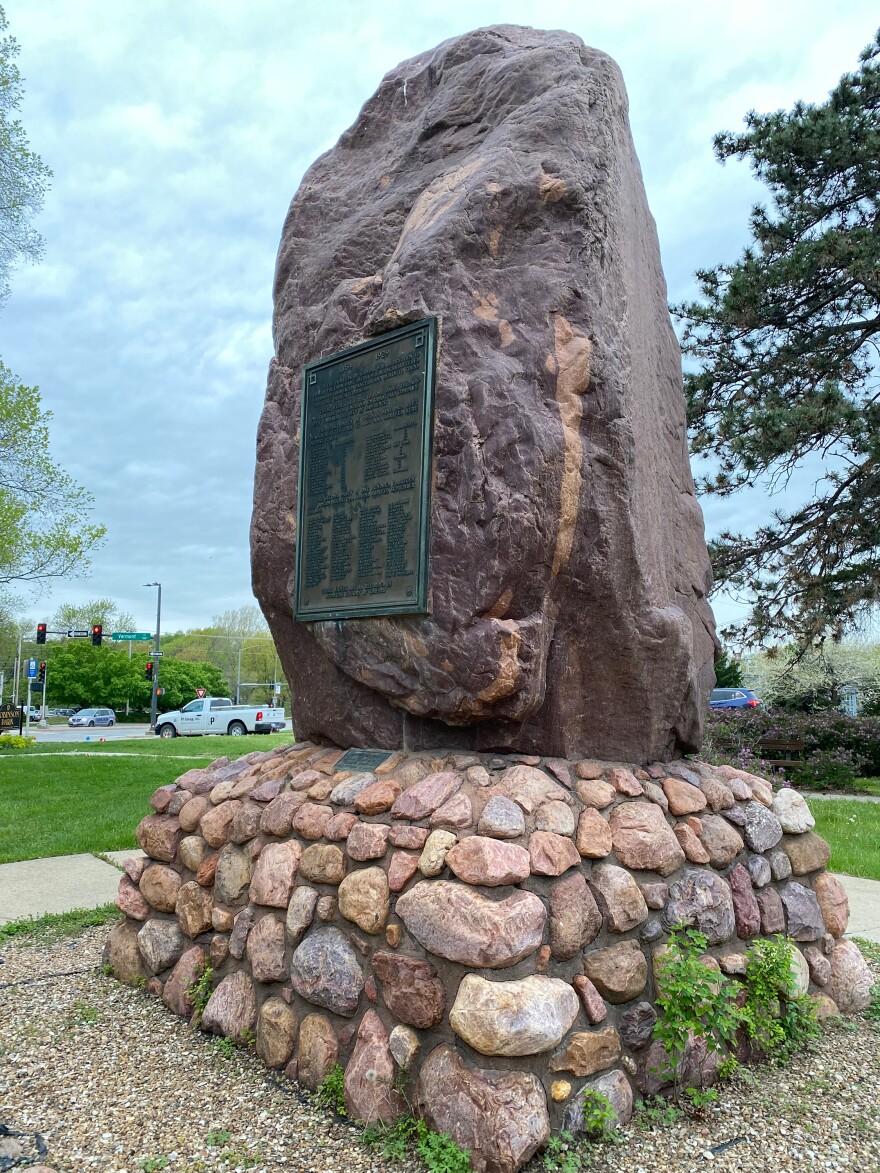 This rock is sacred to Kaw people like Pepper Henry. He said his uncle first introduced him to the rock the tribe calls Íⁿ'zhúje'waxóbe almost three decades ago, and he vividly recalls his first look at it.

"I got goosebumps because, just the scale of it. But I knew how important it was to our people," he said. "I could feel the presence of it. And this rock, it had a long journey from where it came from. It's not from these parts."

Pepper Henry lives in Oklahoma. His Kaw ancestors roamed much of the land now called Kansas hunting buffalo for centuries. But federal troops forced them into smaller and smaller reservations and then dislodged the tribe entirely, pushing it south to Oklahoma in the 1870s.

"Most people in Kansas don't know that the state is named after a group of people native American tribe, the Kanza," Pepper Henry said. "We've been virtually erased from Kansas, and we're invisible to most people here."

A few years ago, a tribal leader and a couple of activists in Lawrence began pushing to return the rock to the Kaw Nation. Jay Johnson, who teaches geography and directs the Center for Indigenous Research and Science at KU, said the Lawrence boosters who hauled the rock into town knew they were taking something significant to the Kanza people.

"They took it and they reappropriated it," he said. "And now the decedents and communities leaders have said, 'You know what? We should give this back and we should apologize."

The city gave it back last year, along with an official apology for taking it in the first place. But Íⁿ'zhúje'waxóbe weighs at least 23 tons, maybe closer to 30. Moving it will be hard.

But Johnson said the timing is good. A national discussion over the importance of ancient symbols and monuments fueled by the racial reckoning in the wake of George Floyd's murder is energizing the effort to return the rock.

"We started to see this national and international movement around monuments and rethinking monuments happening," Johnson said.

The Mellon Foundation is providing $5 million to move Íⁿ'zhúje'waxóbe. The question is where. 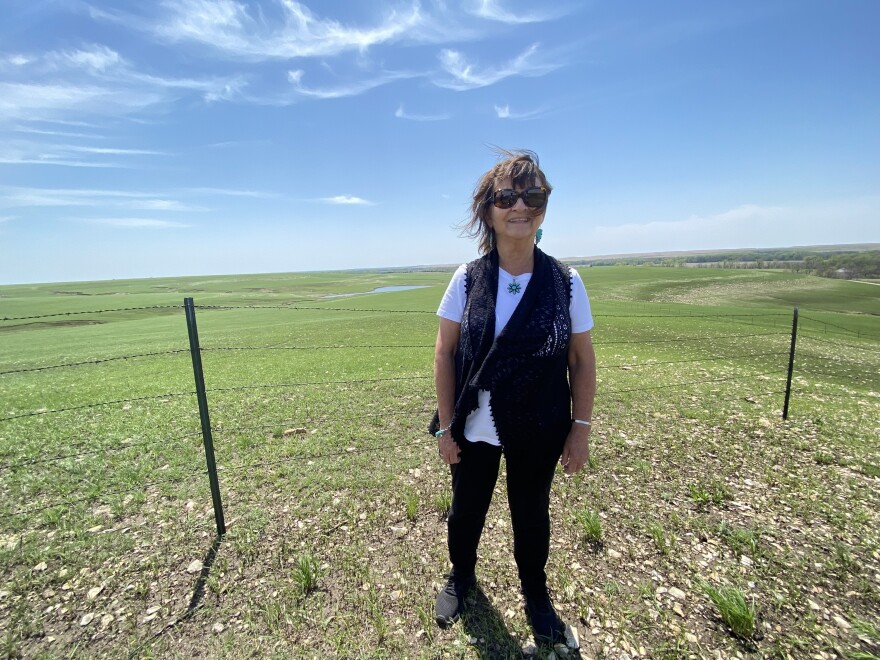 Pauline Sharp standing on a hilltop on the tribe's property in the Flint Hills, where they are considering placing the rock. Frank Morris | KCUR

Recently, a few Kaw leaders took a walk around property the tribe owns just southeast of Council Grove, Kansas, looking for a place for the stone.

"We're in the heart of the Flint Hills. And this is near the site of our last villages in Kansas," said Pauline Sharp, a tribal member.

She was standing in Allegawaho Park, the site of the tribe's last reservation in Kansas, land the tribe purchased about 20 years ago. A nearly 100-year-old native limestone obelisk on the next hill stands as a tribute to an unknown Kanza warrior. The tribe has built a dance pavilion and installed a couple of informational concrete slabs. Now it's looking for the right spot for a spiritual treasure — Íⁿ'zhúje'waxóbe.

Sharp said untold generations of Kaw and other native peoples sought out Íⁿ'zhúje'waxóbe.

"It marked the location of a spirit camp or access to, you know, other dimensions," she said. "It was like a church."

The tribe is trying to decide whether to set it up in a field that's easy to get to, or on top of a hill with sweeping, majestic views. The site selection work is bittersweet for Pepper Henry, because this bucolic spot was the last toehold for his tribe in Kansas, and the place it nearly vanished.

"A lot of our clans were wiped out, mostly from cholera and diphtheria — and smallpox really took a toll — but also starvation," said Pepper Henry, standing on the bank of a creek that runs through the property.

He says the Kaw Nation dwindled to only about 160 people. It's since bounced back to more than 3,700. And Pepper Henry said placing the tribe's sacred rock in a tribal setting may help strengthen the connection between the Kanza people and the state of Kansas.