Pope Francis delivers remarks as he meets Indigenous communities — including First Nations, Metis and Inuit — at Our Lady of Seven Sorrows Catholic Church in Maskwacis, near Edmonton, Canada, on Monday. (Gregorio Borgia | AP)

The pope's apology in Canada was historic, but for some Indigenous people, not enough

Years after a Canadian-government-funded commission issued findings detailing a history of physical and sexual abuse of Indigenous children in the country's Catholic-run residential schools, Pope Francis on Monday issued an apology on Canadian soil.

"I am sorry," the pope said, speaking in Maskwacis, Alberta, at the lands of four Cree nations.

"I humbly beg forgiveness for the evil committed by so many Christians against the Indigenous peoples," Francis said near the site of the former Ermineskin Indian Residential School, where ground-penetrating radar has been used to try to locate unmarked graves of students who died while attending the school.

Thousands of children died at the schools, but the true number may never be known 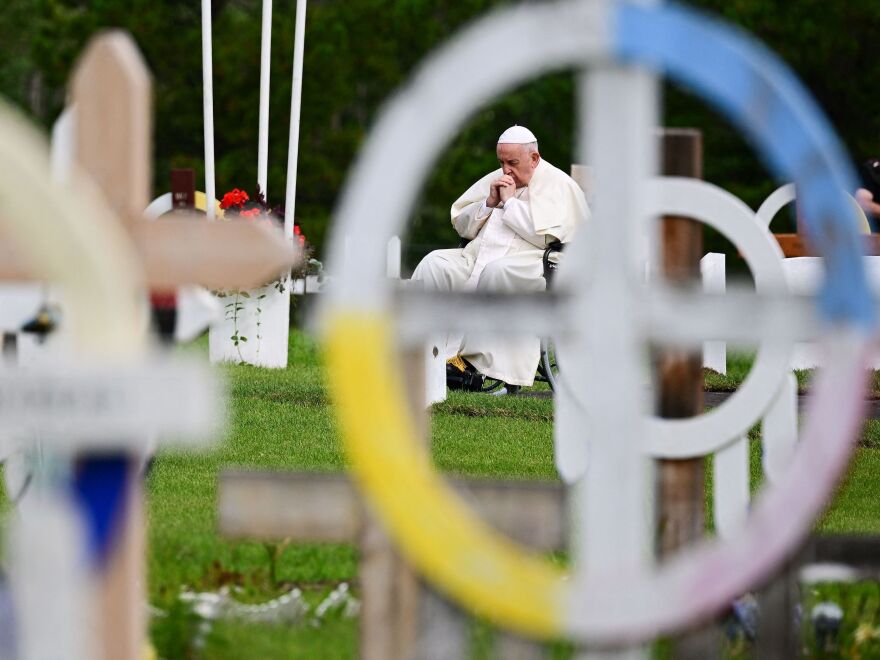 The residential schools forcibly separated Indigenous children from their parents as part of an effort to convert them to Christianity and assimilate them into the wider Canadian culture. In total, 150,000 children from Canada's First Nations tribes were placed in 139 schools run under government contract — most by the Catholic Church — over a 150-year period.

A 2015 Truth and Reconciliation Commission report prompted by the harrowing tales of survivors concluded that "[children] were abused, physically and sexually, and they died in the schools in numbers that would not have been tolerated in any school system anywhere in the country."

Officially, 4,120 children died while in the care of the schools, mostly from diseases such as tuberculosis that ran rampant, according to government statistics. But estimates range considerably higher. The commission, in its report, acknowledged that the true number "is not likely ever to be known in full."

Last year, the unmarked graves of 215 children were found on land once occupied by the Kamloops Indian Residential School. At one time, it was the largest residential school in Canada with 500 students enrolled in the 1950s.

The pope's apology is historic, but there is still frustration with the church A member of the Indigenous community helps display the memorial banner, which was the first national, public record of the names of the children who did not return home from the residential schools across Canada. (AFP Via Getty Images | Patrick T. Fallon)

Earlier this year, Francis expressed "shame and sorrow" for the Catholic Church's role in abuses and for "the lack of respect" shown to Indigenous cultures and their values.

"It's a step in the right direction," says Congress of Aboriginal Peoples National Chief Elmer St. Pierre of the pope's apology on Monday. But "it could have been better," he says.

"When you sing the song [it should be] coming from your heart," says St. Pierre, who was present in Maskwacis when Francis spoke. Francis' statement was "read off a script," he says.

Canada has paid billions of dollars to Indigenous communities as part of a settlement with some 90,000 survivors of the residential schools. Canada's Catholic Church says its dioceses and religious orders have already paid $50 million to the tribes and expects another $30 million in coming years.

Carol McBride, president of the Native Women's Association of Canada, said she hoped the pope's apology would start a dialogue between the church and First Nations that would lead to the release of school records and the return of tribal artifacts that she says reside at the Vatican. The Holy See insists the headdresses, carved walrus tusks and other items were gifts to Pius XI, who was pope from 1922 until his death in 1939.

"I just can't understand why they don't want to release those files," McBride said. "And the same thing goes with the artifacts. Those are our First Nations and Indigenous people's artifacts. Why are they sitting there at the Vatican? Why are they not here?"

She says she welcomes the pope's apology, but acknowledges "a lot of mixed emotions at this point, where some people are happy with the visit and the intent and [others don't] want to hear about it at all."

The pope on Monday specifically asked forgiveness for "projects of cultural destruction and forced assimilation promoted by the governments of the time."

More than 350 similar boarding schools — about a third managed by various Christian denominations — operated in the U.S. up until the last of them were closed in the 1970s. Beginning a century before, Indigenous children were sent to these off-reservation schools, where they were forbidden to speak their native language and forced instead to use English.

Last year, Interior Secretary Deb Haaland, the country's first Native American Cabinet secretary, commissioned a review of the school system for Native children in the U.S. The investigation has already identified marked or unmarked burial sites at approximately 53 schools, according to the Interior Department.